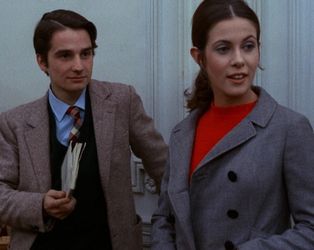 Antoine Doinel is now eighteen years old. At a concert of the ‘Jeunesses musicales’, he immediately falls in love with a young student. He moves into the apartment opposite her, so he can see her all the time. He even becomes her parents’ protégé, but the closer he thinks he is getting to her, the more she remains out of reach.

Jean-Pierre Léaud returns in the delightful Stolen Kisses, the third instalment in the Antoine Doinel cycle. It is now 1968, and the mischievous and perpetually love-struck Doinel has been dishonourably discharged from the army and released onto the streets of Paris. His girlfriend Christine’s (Claude Jade) father lands Antoine a job as a security guard, which he promptly loses. Stumbling into the unlikely profession of private detective, Antoine falls for Fabienne (Delphine Seyrig) whilst posing as a clerk in her husband’s shoe store, upon whom he is spying, and finds he must choose between the older woman and Christine.

These films screen as part of the François Truffaut season, May 7th to 31st.