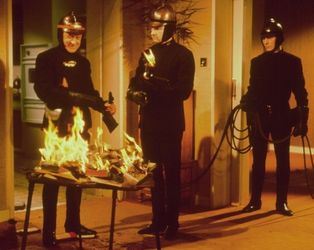 Francois Truffaut’s adaptation of Ray Bradbury’s celebrated science fiction novel, which depicts a dystopian future where a totalitarian government has suppressed independent thought and outlawed all reading material, was his first English language film, and his first in colour, vividly shot by the great Nicolas Roeg. His approach to Bradbury’s novel foregrounds the character of Montag (Oskar Werner), a Fireman employed by the government to seek out and destroy all literature, and his clandestine relationship with Clarisse (Julie Christie), a young book-loving schoolteacher who forces him to question the morality of his actions and his allegiances to the state.