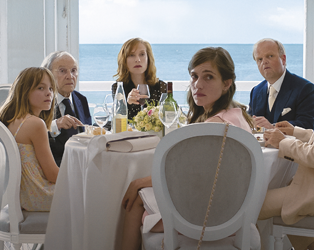 DECEMBER AT THE IFI

December is here, and that means we’re about to welcome our final festival of the year, the IFI & Kinopolis Polish Film Festival, and our usual slate of Christmas films! Please note in December, our cinemas are closed 24/25/26 December, but the IFI Film Shop will remain open on Christmas Eve for those last-minute gifts!

Read on to get a full rundown of December at the IFI.

1st FRI – JAHA’S PROMISE + Q&A
Winner of the Audience Award at the 2017 IFI Documentary Fesitival, Jaha’s Promise tells the story of campaigner Jaha Dukureh as she battles against the horrific practice of female genital mutilation (FGM). The 18.40 screening on Friday 1st will be followed by a Q&A with director Patrick Farrelly and cinematographer Kate McCullough.

2nd SAT – IRISH FOCUS: SOULSMITH + Q&A
Playwright Ed Smith (Matthew O’Brien) return has fallen far from the heights of his early success on the Dublin stage. When he receives word of a family bereavement, he travels home to Mayo to attend the funeral and reconnect with family and friends. Director Kevin Henry will participate in a post-screening Q&A.

2nd SAT / 3rd SUN – MAVERICKS: SURFING DOCS AT THE IFI
A short season of surfing documentaries which includes the Irish premiere of Rory Kennedy’s Take Every Wave: The Life of Laird Hamilton, and encore screenings of Gaza Surf Club and Between Land and Sea. The screening of Between Land and Sea will be followed by a Q&A with director Ross Whitaker.

4th MON – IT’S NOT YET DARK
Filmmaker Simon Fitzmaurice passed away in November, following a long battle with Motor Neurone Disease. We’re proud to present this screening, in tribute to Simon, and introduced by director Frankie Fenton.

5th TUE – FROM THE VAULTS: HUSH-A-BYE-BABY + Q&A
Originally release in 1989, Margo Harkin’s drama centres on a young woman who discovers she’s pregnant, just as her boyfriend is arrested and imprisoned by the British Army. The screening will be followed by a Q&A with director Harkin.

7th THUR – 10th SUN: IFI & KINOPOLIS POLISH FILM FESTIVAL
The 12th edition of Kinopolis includes new films from Agnieszka Holland (Spoor), Bodo Kox (The Man with the Magic Box) and Maria Sadowska (The Art of Loving: The Story of Michalina Wisłocka). Director Robert Gliński will visit the festival with his film Be Prepared, and will take part in a post-screening Q&A.

8th FRI – SONG OF GRANITE + Q&A
Acclaimed filmmaker Pat Collins presents the life story of legendary sean-nós singer Joe Heaney. A work of musical integrity and cinematic purity, the film has been selected as Ireland’s entry for the 2018 Foreign Language Oscar.  Pat Collins will participate in a post-screening Q&A following the 18.15 screening on Friday 8th.

17th SUN – IFI FAMILY: A CHRISTMAS STORY
Set in 1940s small town Indiana, nine-year-old Ralphie dreams of getting a Red Ryder BB gun for Christmas, but his parents won’t hear of it. This nostalgic Christmas story is told with great humour and heart, and has become a popular classic in the US.

19th TUE – FEAST YOUR EYES: IT’S A WONDERFUL LIFE
Our monthly pairing of a film and a specially devised main course menu will be the seminal Christmas classic, It’s a Wonderful Life, followed by a festive feast in the IFI Café Bar. Tickets €20 – free list suspended.

27th WED / 29th FRI – WILD STRAWBERRIES: INDIGNATION
This adaptation of Philip Roth’s 2008 college novel is a quiet chamber piece mixing great performances with themes of sexuality, belief and adulthood, all against the backdrop of a changing America. This is our film club for the over 55’s, with tickets for just €4.25 plus free tea or coffee.