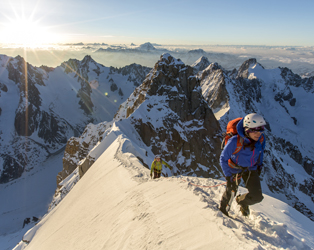 This film was released on Friday 15th December 2017 and is no longer screening.

A cinematic and musical collaboration between filmmaker Jennifer Peedom and the Australian Chamber Orchestra, Mountain explores mankind’s enduring fascination with the world’s highest peaks, physically as monumental climbing challenges and poetically through the power they exercise over the imagination.

The project was conceived as live concert experience, with the vertiginous footage of mountaineering and extreme sports being accompanied by vigorously performed classical pieces.

A commentary written by academic and mountaineer Robert Macfarlane, authoritatively narrated by Willem Dafoe, underpins the visuals. Macfarlane gets to the essence of Peedom’s thesis with the insightful comment, ‘those who travel to mountain tops are half in love with themselves and half in love with oblivion’.