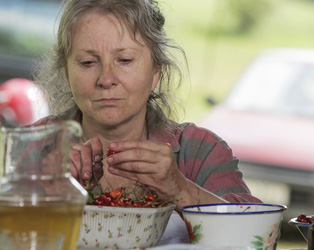 From her collaborations as a writer with Andrzej Wajda and Krzysztof Kieślowski to her extensive body of work in film and television as director (including 2011’s Oscar-nominated In Darkness), Agnieszka Holland has established herself as one of Poland’s most renowned filmmakers. Spoor premiered in competition at this year’s Berlin Film Festival and credits Holland’s daughter Kasia Adamik as associate director.

Duszejko (Agnieszka Mandat) is a staunch advocate for animal rights in a rural area where hunting is a way of life. Her regular complaints are treated with weary platitudes by the local authorities. However, when the bodies of local hunters are found in mysterious circumstances, Duszejko begins her own investigation, convinced that the police are entirely wrong in their assumptions.