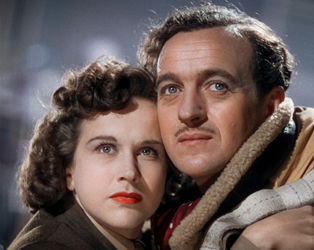 The partnership of Michael Powell and Emeric Pressburger is one of the most influential in cinema history. Among the undisputable masterpieces created by the two are The Life and Death of Colonel Blimp (1943), The Red Shoes (1948), The Tales of Hoffman (1951), and this fantasy-romance, one of their best-loved and most imaginative works, presented here in a new digital restoration.

When RAF pilot Peter Carter (David Niven) takes heavy fire and fears he is about to die, he spends his last few moments talking to American radio operator June (Kim Hunter). However, he miraculously survives the crash as the being sent to ferry him to the afterlife loses him in the fog. After he meets and falls in love with June, Peter is summoned to the Other World to accept his death, a fate he appeals in this magical film.