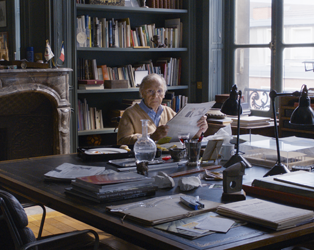 This film was released on Friday 1st December 2017 and is no longer screening.

Ageing Calais construction magnate Georges Laurent (Jean-Louis Trintignant) has passed the reins of the family business to daughter Anne (Isabelle Huppert). However, a series of increasingly sinister events soon conspire to unravel the wealthy clan’s cosseted existence. A coolly observed study of familial dysfunction, Michael Haneke’s follow-up (and, given the reappearance of Georges Laurent, in some respects sequel) to Amour (2012) has all of the stylistic traits we have come to expect from this master filmmaker: the cut-glass precision, scenes shot to resemble static surveillance footage, and significant action taking place in the margins of long shots.

Thematically, the film revisits Haneke’s concerns with bourgeois complacency and guilt, racial prejudice and our changing relationship to technology. Moments of comedy introduce a surprising and welcome new element to the director’s winning formula.