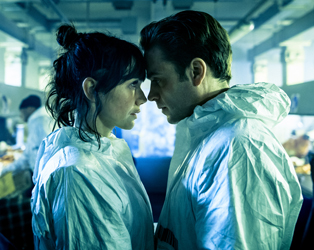 A stylish and eccentric sci-fi thriller from director Bodo Kox (The Girl From The Wardrobe, 2012), The Man With The Magic Box pays homage to numerous genre classics, particularly Terry Gilliam’s Brazil (1985) and Twelve Monkeys (1995).

In dystopian Warsaw, 2030, Adam (Piotr Polak) is an office cleaner with no memory of his former life. His advances towards Gloria (Olga Bołądź) are initially rebuffed, but they soon move to a casual, no strings arrangement, and finally to something more meaningful. At the same time, Adam discovers in his apartment a radio that broadcasts old programmes from the 1950s that somehow makes time travel possible. When he disappears, Gloria sets out to find him in this playful and engaging film.