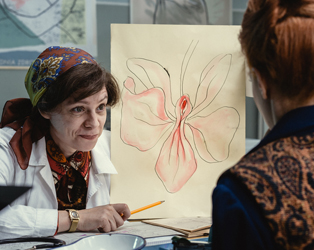 The fascinating life of gynaecologist and sexologist Michalina Wisłocka forms the subject matter of this biopic, led by a tour-de-force performance by Magdalena Boczarska in the title role.

Wisłocka came to public attention in the 1970s for her book The Art Of Loving, a frank and accessible guide to sex and sexuality that endured a tortuous path to publication as she fought against the censorship of her material imposed by authorities.

While this struggle forms the spine of the film, the remainder examines the author’s own personal life, including her unorthodox romantic and family arrangements, and her perhaps surprisingly difficult relationship with her own sex life. The film is never less than entertaining, due in no small part to Boczarska’s vivacious turn.