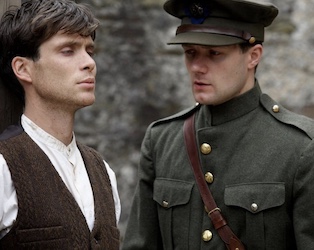 The inherent drama of Ireland’s centuries-long struggle for independence has captured the imaginations of Irish and international screenwriters and directors since the early days of cinema, when newsreel cameramen documented the turbulent 1900 –22 period, and dramatists like the Kalem Company made a series of bold nationalist narratives.

As we mark the centenary of the War of Independence and the Irish Civil War, this programme presents a selection of feature film representations, both Irish and foreign, dating from the silent era to more recent times. The relative simplicity of the War of Independence conflict lends itself more readily to the screen than the nubby complexity of the bitter Civil War, but both feature here. Familiar tropes include shoot-outs, ambushes, chases through city streets, the good Irish and the bad Black and Tans, and heroic protagonists torn between The Cause and their loved ones. Many recent works have been based on real figures and show great concern with period detail and historical accuracy. All are compelling human dramas which allude to the brutality of the bloody war against which they are set.

This programme includes many rarely-seen films such as The Dawn, Beloved Enemy, Guests of the Nation and Ourselves Alone. The films in this programme – and others – will be explored in a day-long Symposium, Capturing Conflict, which takes place in the IFI on June 24th.

Select titles are available to view online on IFI@Home.