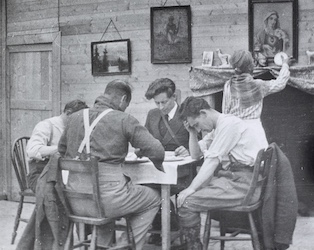 During the War of Independence, two British soldiers are held prisoner in the Dublin hills by IRA volunteers who hope to exchange them for IRA prisoners facing execution. A friendship grows between the men as they await word of their fate. The film was made by a group of amateur enthusiasts, Denis Johnston and friends, theatre people with little prior experience of filmmaking. Adapted from a short story by Johnston’s friend Frank O’Connor, the cast included Barry Fitzgerald (in his first film role), Cyril Cusack, Hilton Edwards, and, apparently, Frank O’Connor himself. This late silent film, though technically primitive in parts, is remarkable for the purity of its visual storytelling.

With Niall Byrne’s powerful new score, performed in a recording by the RTÉ Concert Orchestra.