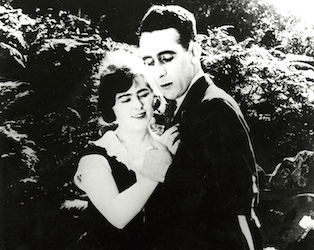 Irish Destiny, the first fiction film made about the War of Independence, was released on the 10th anniversary of the Easter Rising, just a scant few years after the events it depicted. An action-packed love story filmed in Enniskerry, Wicklow and on the streets of Dublin, it includes dramatic scenes of sexual violation, motorbike chases, poitín making and a prison escape. The film cleverly incorporates newsreel footage of the Black and Tans and the burning of Cork alongside the dramatised sequences. The film, restored with original hand-tints and tones, is accompanied by Mícheál Ó Súilleabháin’s memorable score recorded by the RTÉ Concert Orchestra.