During the War of Independence, Brian Malone is expelled from the IRA when allegations emerge that his grandfather was an informer. Incensed, he joins the RIC but when he witnesses the brutality of his Black and Tan associates, he deserts and warns his former comrades of an impending ambush. The Dawn is Ireland’s first indigenous sound feature. Made by Tom Cooper, a Killarney garage and cinema owner with local cast and crew (many of whom had fought in the War of Independence), the film was widely acclaimed upon its release. ‘From a national viewpoint the picture is magnificent. It is biased – but justifiably. It condemns – but was there not much to condemn?’ (Irish Press).

The Dawn digital restoration was funded by Kerry College and undertaken by the trainees of the Broadcast Production Skills course in Monavalley Campus, Tralee.

With thanks to the Cooper family. 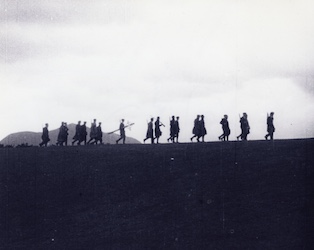