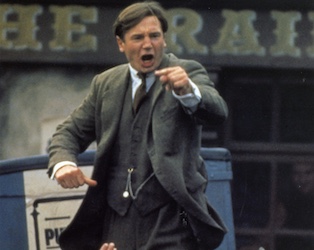 Irish revolutionary leader, politician, Minister for Finance, and Director of Information were just some of the hats worn by Irish patriot and revolutionary Michael Collins. Liam Neeson stars in Neil Jordan’s historical epic, in an intelligently calibrated performance capturing Collins’s seductive charisma and complexity. Jordan’s direction brings startling ferocity to the guerrilla warfare, helped by magnificent period design and attention to detail. The film is remembered as a national event both in terms of its production when thousands of people turned up as extras for the crowd scenes, and its subsequent popularity at the Irish box office – indicative of an ongoing national interest in the political legacy of this turbulent period and in how it is narrativised.