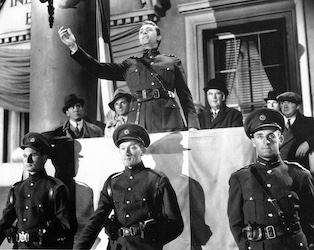 This is a love story loosely based on the love affair between Michael Collins and Lady Lavery. In this lavish Samuel Goldwyn production, Merle Oberon and Brian Aherne play a beautiful young aristocrat and a charming Irish rebel who fall in love despite their social, cultural and political differences. The film is far from historically accurate but is fascinating nonetheless in its depiction of military activity, the negotiation of a peace settlement, and The Treaty. This is the only known surviving copy with the original downbeat ending which was later recut to allow our hero to live.

Restored from nitrate elements by the IFI Irish Film Archive and the Limerick Film Archive with support from the Heritage Council.