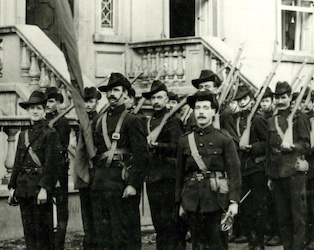 IFI and Maynooth University present a day-long symposium aimed at historians, film-lovers, academics and members of the general public. The Irish Decade of Centenaries programme 2012- 2023 has prompted consideration of Ireland’s social and political heritage and its representation in cinema. This symposium will feature contributions from Irish and international academics and also from Irish filmmakers. The papers will cover a broad sweep of topics: the declaration of the republic on screen; the denigration of de Valera on film; cinema-going during the War of Independence; the revolutionary period in cinema newsreels; feminist readings of key texts and the ethics of historical documentary making.

Taking place as part of our Capturing Conflict season, June 4th to 24th.

Supported by the Department of Tourism, Culture, Arts, Gaeltacht, Sport and Media under the Decade of Centenaries Programme 2012-2023.