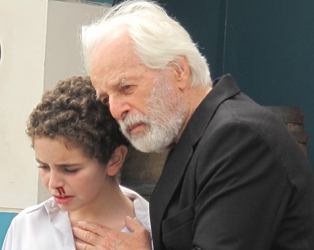 Chilean filmmaker Alejandro Jodorowsky is one of cinema’s great polymaths. His artistic career has lasted over 70 years, with no signs of slowing, spanning the disciplines of theatre, mime (including a period of collaboration with Marcel Marceau), literature from stage plays to comic strips, painting, and sculpture, as well as film. Given his numerous preoccupations, it is perhaps unsurprising, if unfortunate, that his filmic body of work is quite small. However, this is also a situation that has been exacerbated by perennial funding problems, as well as complicated distribution and copyright conditions that for some years made even his best-known
films difficult to see.

Jodorowsky’s work is strongly informed by his lifelong interest in philosophy and psychology, and equally strongly influenced by his association with the Surrealist movement and its practitioners. As a result, they are artefacts densely packed with allusion and symbolism, displaying a strong emphasis on the visual. The abstract, subversive, and occasionally shocking nature of his imagery has often seen the director dogged by a reputation as a cult filmmaker in the midnight movie genre, but his work is far richer than this might suggest. Instead, it speaks of Jodorowsky’s continuing search for spiritual enlightenment through art.

Introduction and notes on individual films by Kevin Coyne. Fando and Lis, El Topo and The Holy Mountain will screen in new 4k restorations. Multi-film pass available – 5 films for €50.