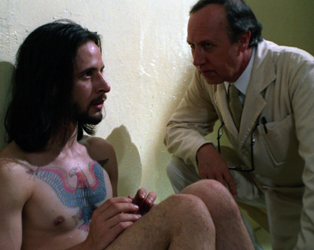 Following the collapse of Dune, Jodorowsky took another direction entirely with children’s fable Tusk (1980), which, despite best efforts, proved unavailable for this season. It was not a success, and the decade would almost have turned before cinemas once again hosted a new film by Alejandro Jodorowsky, one which was a return to the more avant-garde style of his earlier work. Whereas El Topo was often described as an acid western, Santa Sangre could be roughly classified as a psychedelic horror film. Traumatised as a child by the violence in his parents’ relationship, Fenix (played at the various stages in his life by Jodorowsky’s sons Adan and Axel) grows to become a murderer-by-proxy for his disturbed and disfigured mother.