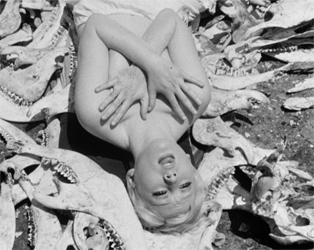 Presented in a new 4K restoration.

Jodorowsky’s debut feature was based on his memories of seeing a play by Spanish writer Fernando Arrabal. Titular couple Fando (Sergio Kleiner) and his girlfriend Lis (Diana Mariscal), who is confined to a wheelchair, seek the mythical and paradisiacal city of Tar, where wishes are granted and eternal happiness awaits. The journey leads to a series of encounters that spiral from odd to disturbing as the two are exposed to the extremes of human experience and desire and the impossibility of reaching the city becomes apparent.

The film’s 1968 premiere at the Acapulco Film Festival incited the audience to riot, forcing the director to hide from the crowd for his own safety, merely setting the scene for his later notoriety.