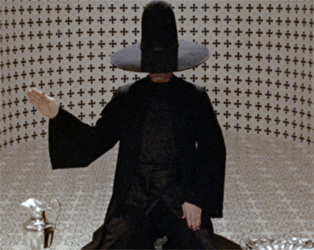 After El Topo became something of an underground phenomenon, Jodorowsky acquired powerful and influential fans, including John Lennon and Yoko Ono, who contributed to the funding of his next feature, The Holy Mountain. Working on one level as a satire of organised religion, the film follows a thief (Horacio Salinas) who joins the entourage of The Alchemist (Jodorowsky), their intention being to ascend a legendary Holy Mountain and confront the immortal masters who dwell at the summit. The film is arguably Jodorowsky’s most complex and perhaps also presents his vision at its purest. The surreal imagery is beautiful, bewildering, and shocking, often in the same scene, and saw the director’s expression of and interest in spirituality reach new heights.