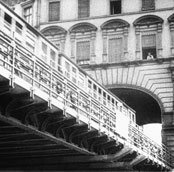 July 24th, 2017: The Irish Film Institute, in association with Goethe-Institut Irland, is proud to present Dark Corners: Cinema from the Weimar Republic, a season of twelve films, running from August 5th to August 30th, from one of the most innovative periods in the development of cinema. Featuring the work of masters such as Fritz Lang, Ernst Lubitsch, and F.W Murnau, the season will include special screenings of two films with live musical accompaniment. The IFI is also delighted to welcome Dr Piotr Sadowski from the Dublin Business School, and Stefan Drößler, Director of the Munich Film Museum, to introduce screenings throughout the month.

Speaking at the launch of the season, IFI Cinemas Programmer Kevin Coyne, commented, ‘The IFI is pleased to celebrate the enduring legacy and influence of cinema of the Weimar Republic. The films of this period had a profound effect in shaping modern film culture and technique, created by filmmakers who number among the most respected practitioners of the craft.’

The season begins on Saturday 5th with Walther Ruttmann’s Berlin: Symphony of a Great City. Structured to portray the life of Berlin and its inhabitants across the course of a single day, the film’s themes mirror those of Robert Siodmak and Edgar G. Ulmer’s fascinating social documentary People on Sunday, which will screen on Sunday August 27th. The screening of People on Sunday at 15.30 will be introduced by Stefan Drößler, Director of the Munich Film Museum, following his discussion of Weimar Republic cinema the same day at 14.00.

We are delighted to also welcome Piotr Sadowski, lecturer at the Dublin Business School, to introduce F.W. Murnau’s classic Faust on Saturday 19th and G.W. Pabst’s Westfront 1918 on Tuesday 22nd. Faust, which centres on a man who makes a deal with the devil, was the most expensive film made in Germany at the time, and it remains an unmissable visual triumph.

Acclaimed musician Hilary Woods will provide live musical accompaniment to Carl Boese and Paul Wegener’s The Golem: How He Came into the World on Tuesday 8th. The film represents one of the key works of Expressionism, as well as being one of the earliest and most influential horror films. Leo Birinski and Paul Leni’s Waxworks will equally delight horror fans when it screens on 16mm on Tuesday 15th.

The season will include films from two female directors: The Adventures of Prince Achmed, directed by Lotte Reiniger, is the world’s oldest surviving animated feature, employing stunning silhouette animation to recount the wonders and dangers faced by its eponymous hero; the screening will be accompanied by live music in screen. Showing on Thursday 24th will be Leontine Sagan’s iconic and all-female Mädchen in Uniform, a film unique at the time for its openness around sex and sexuality.

Also screening as part of the season will be E.A. Dupont’s Variety, starring Oscar-winning actor Emil Jannings, Ernst Lubitsch’s The Mountain Lion, and Fritz Lang’s Frau Im Mond, a silent science fiction epic about a group of businessmen who co-opt a mission to the moon in order to plunder its gold deposits.

Closing the season on Wednesday 30th will be Slatan Dudow’s Kuhle Wampe, Or Who Owns the World? Notable for its explicitly communist politics, ‘Kuhle Wampe’ is a community for the dispossessed. When a teenage girl’s family is forced to move there, she becomes involved in workers’ rights, advocating for class solidarity and revolution.

‘Dark Corners’ is presented in association with Goethe-Institut Irland. For more information about the festival and to buy tickets, please visit www.ifi.ie/dark-corners or contact the IFI Box Office on 01-6793477.

For interview requests and images, please contact Michelle McDonagh (mmcdonagh@irishfilm.ie) at the IFI Press Office on 01 6795744.

The Adventures of Prince Achmed (Die Abenteuer des Prinzen Achmed) The screening will be accompanied by a live musical performance.

The Golem: How He Came into the World (Der Golem: wie er in die Welt Kam) The screening will be accompanied by a live performance from musician Hilary Woods.

15.30: People on Sunday (Menschen am Sonntag) The screening will be introduced by Stefan Drößler, Director of the Munich Film Museum.