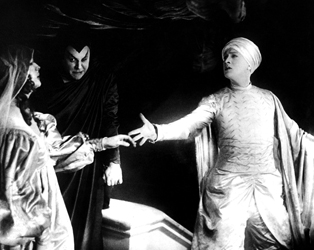 Like Lang, F.W. Murnau is a towering figure of this period, thanks to films such as Nosferatu (1922), The Last Laugh (1924), and, after moving to America, Sunrise: A Song of Two Humans (1927). Murnau’s approach to framing and his use of liberating camera movements suggested to subsequent filmmakers a new way of using the pictorial space.

Faust, the director’s final German film, draws on sources including Marlowe and Goethe in service of the story of a man who makes a deal with the devil. At that time the most expensive film made in Germany, it remains a visual triumph.

The screening will be introduced by Dr. Piotr Sadowski, lecturer in film, literature, and drama at Dublin Business School, and author of an upcoming book on Weimar cinema.