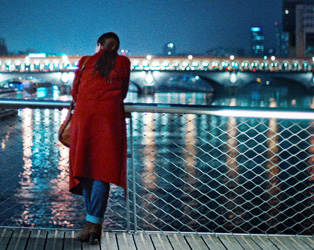 Highlights of this year’s festival include an opening night Gala Screening of Claire Denis’ Let the Sunshine In starring Juliette Binoche; Robin Campillo’s 120 BPM (Beats Per Minute), which won the Grand Prix at this year’s Cannes Film Festival; Faces Places, the new documentary from veteran director Angès Varda; Happy End, which sees director Michael Haneke reunite with Isabelle Huppert and Jean-Louis Trintignant; and the return of Oscar-winner Michel Hazanavicius with his affectionate and irreverent ode to Jean-Luc Godard, Redoubtable. Also screening will be veteran Philippe Garrel’s Lover for a Day, alongside a retrospective of master director, Jean-Pierre Melville.

Commenting on this year’s programme, festival director Marie-Pierre Richard, said, “This year’s programme brings together films of remarkable diversity: films in tune with our times, which open up the world around us, shedding light on local and global upheaval, films full of thoughtfulness and hope in our rapidly changing world. Aurora, Ava, Barbara, Jeune Femme, Félicité, Let the Sunshine In and A Woman’s Life also each offer enthralling and unique portraits of resilient and inspiring women. We’re also very excited to welcome French superstar Agnès Jaoui to the festival, and to present a fine retrospective of Jean-Pierre Melville films with the support of Institut Français to mark the centenary of his birth.”

Agnès Jaoui will attend the festival to present Aurora, Blandine Lenoir’s joyous comedy about a woman facing the menopause and impending grandmotherhood; she will participate in a Q&A following the 18.30 screening on Friday 17th. Jaoui will also participate in a masterclass on Saturday 18th, in conversation with director Rebecca Daly, organised in conjunction with Screen Training Ireland, before introducing a very special screening of her Oscar-nominated hit, The Taste of Others, later that afternoon.

Writer-director Léa Mysius will participate in a Q&A following the Sunday 19th screening of her début feature Ava, the story of a young girl’s last holiday before she loses her sight; the screenings of Ava will be preceded by Mysius’s short Thunderbirds (Les Oiseaux-tonnerre). Mysius will also introduce a screening of Arnaud Desplechin’s Ismael’s Ghosts, starring Mathieu Amalric, which she co-wrote.

To celebrate the centenary of the birth of auteur Jean-Pierre Melville, we are delighted to present four features, plus a rare screening of his only short film, during the festival. Best known for his ultra-cool, austere, mesmerising exploration of the human psyche, Melville’s influence has been considerable on the work of Jim Jarmusch, Michael Mann, Quentin Tarantino and John Woo. Screenings will include the 1949 classic The Silence of the Sea, preceded by his short 24 Hours in the Life of a Clown, Bob the Gambler, Léon Morin, Priest, and Army of Shadows, starring Simone Signoret.