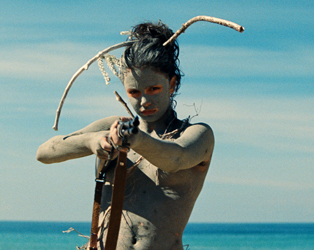 The screening on Sunday, November 19th will be followed by a Q&A with Léa Mysius, moderated by Dr. Maeve Connolly of IADT. The screenings of Ava will be preceded by Léa Mysius’s short Thunderbirds (Les Oiseaux-tonnerre). Screened with the support of the Fémis French National Film School.

Thirteen-year-old Ava (Noée Abita) is spending her summer on the Atlantic coast when she learns that her retinitis pigmentosa is advancing and she will lose her sight sooner than expected. While her mother determines to make the holidays especially memorable, Ava is more inclined to explore her attraction to Juan, a local Spanish tearaway, whose wolfish black dog she steals in an effort to gain his attention. Léa Mysius’s luminous début feature, shot on 35mm, is a distinctive, highly original coming-of-age drama.