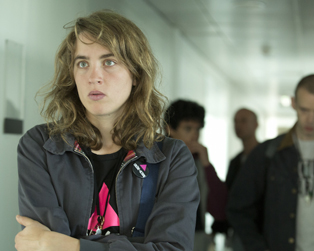 Director Robin Campillo will take part in a Q&A after the 19.30 screening on Monday November 20th, hosted by GCN’s Brian Finnegan. Tickets on sale now.

Set in the 1990s at the height of France’s AIDS epidemic, Robin Campillo’s (Eastern Boys, IFI French Film Festival 2014) film follows the grassroots Act Up campaign of agitation against a pharmaceutical company that refuses to reveal its findings on potentially effective new drugs. Against this backdrop the HIV-positive Sean, one of the group’s founders, begins a tentative romance with gentle newcomer Nathan, who has tested negative for the virus. 120 BPM is by turns a beautifully observed love story and a fiercely engaged political work that simmers with a quiet anger.

Director’s Note: The courage of 1990s ACT UP AIDS Activists is poignantly portrayed by this vibrant group of young actors.