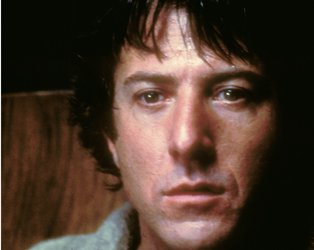 On the occasion of the re-release of Mike Nichols’s The Graduate (back from June 23rd), the IFI takes the opportunity to celebrate the work of Dustin Hoffman, who turns 80 later this year. A native of Los Angeles, Hoffman took to acting while in college, moving to New York to pursue his career, where he formed enduring friendships with fellow aspirants Gene Hackman and Robert Duvall.

Following his film debut, a brief appearance in Arthur Hiller’s The Tiger Makes Out (1967), his next role was in The Graduate, for which he gained the first of seven Oscar nominations, and in which he redefined Hollywood’s expectations of the traditional leading man. This led to his most fertile period, the 1970s, when he appeared in a number of contemporary American classics, displaying a remarkable range and versatility as an actor.

The 1980s saw Hoffman becoming more selective in his choices, which ranged from a notorious box office flop, Elaine May’s underrated Ishtar (1987), to the Oscar-winning Rain Man (1988). His career since has been similarly unpredictable, but Dustin Hoffman remains an eminently watchable and incredibly talented artist, one of the finest American actors to have appeared on the big screen.