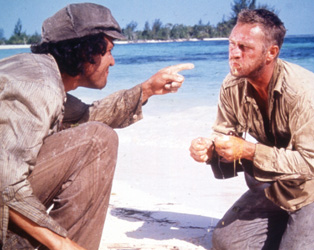 One of the great prison films, Papillon is based on the autobiography of French convict Henri Charrière, whose titular nickname was derived from his tattoo of a butterfly. Portrayed here by Steve McQueen, Charrière, although guilty of being a safecracker, is wrongly convicted of murder and sent to a penal colony in French Guiana, where he meets fellow inmate Louis Dega (Hoffman).

The two form an alliance of convenience before eventually becoming friends, and make a number of attempts to escape. Although McQueen is undoubtedly the film’s star, Hoffman shines as the gentle intellectual who believes he will one day be free.