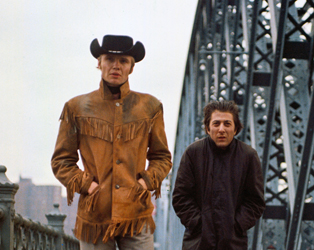 Famously the only X-rated film to win the Oscar for Best Picture, in Midnight Cowboy Hoffman plays ‘Ratso’ Rizzo, a small-time New York conman who falls in with Texan Joe Buck (Jon Voight). Joe has come to the city with misguided dreams of becoming a high-end prostitute. After a disastrous start, he reluctantly allows Ratso to become his manager, although he proves no better in the industry than Joe. Despite this, a genuine friendship develops.

Mike Nichols was horrified that Hoffman chose to follow The Graduate with this role, but Hoffman received his second Oscar nomination for his performance.