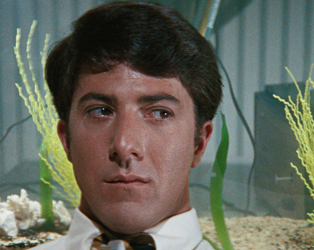 This film was released on Friday 23rd June 2017 and is no longer screening.

Director Mike Nichols’s timeless classic is reissued on the occasion of its fiftieth anniversary in a new digital restoration. Following his graduation from college, 21-year-old Benjamin (Dustin Hoffman) evades making plans for his future while he begins an affair with seductive older woman Mrs. Robinson (Anne Bancroft). Benjamin soon suspects that he and his lover have little in common, a feeling magnified when he meets her daughter Elaine (Katharine Ross), who is his age and with whom he feels genuinely comfortable. Over her mother’s strenuous objections, he begins a relationship with Elaine that is derailed when the truth comes out, leading Benjamin to make a mad dash to salvage his future with her.

Along with its Simon and Garfunkel soundtrack, The Graduate’s appeal has remained over the decades. Please see page 15 for details of our Dustin Hoffman retrospective.