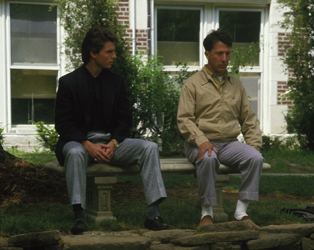 Rain Man saw Dustin Hoffman win his second Oscar for his portrayal of the autistic savant Raymond Babbitt. Raymond is the elder brother of Charlie (Tom Cruise), who had no idea of his existence until trying to trace the main beneficiary of their father’s will. Although Charlie initially tries to merely use Raymond to gain his share of the estate, a cross-country journey reminds Charlie of childhood incidents long forgotten and his attitude changes and softens. One of the first films to bring autism to a wider audience, it’s an affecting film that refuses a pat happy ending.