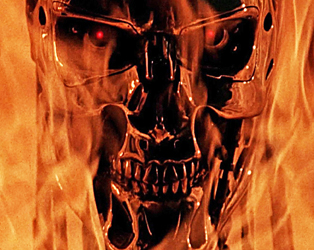 The rapid development and integration of automation, information and biotechnologies offers seemingly limitless opportunities in all aspects of our public and private lives, but at what cost? The unchecked progress of machines with artificial intelligence capabilities has the potential to become a pressing concern for future generations, though cyborg armies will probably remain the preserve of speculative science fiction. Greater social inequality seems a more likely prospect as automation in the service and industrial sectors, driverless cars and medical diagnosis by algorithm could see millions out of work as human roles become redundant. Perhaps we are facing the prospect of a two-tiered system where ‘upgraded humans’, those elite classes who can afford the latest age-defying enhancements, will have the advantage over the less fortunate.  With millions of newly unemployed, and a two-tier system favouring those who can avail of the benefits of A.I., humanity may be required to re-evaluate its significance in relation to the machines.

As we await our fate, Dark Skies, IFI’s annual science-fiction film festival, explores how the genre has responded to our ambiguous relationship to the machines we have created. From Donald Cammell’s bizarre and unsettling Demon Seed, which foreshadows the current merging of information and biotechnologies, to James Cameron’s Terminator 2: Judgement Day (screening in spectacular 70mm), which feeds anxieties surrounding A.I.’s role in a nuclear war into a pyrotechnic action spectacle. Elsewhere, Stanley Kubrick’s icy intelligence is complimented by Steven Spielberg’s trademark sense of wonder in the visually resplendent A.I. Artificial Intelligence, and the sober documentary Hi, A.I. takes a look at some contemporary human-robot relationships.

Introduction and individual film notes by David Mahony. A multi-film pass for the season, 4 films for €37 excluding Terminator 2: Judgment Day, is available directly from the IFI Box Office.