Having been unable to satisfactorily realise his vision for Brian Aldiss’s 1969 short story, Supertoys Last All Summer Long, Stanley Kubrick gifted the project to Steven Spielberg, who eventually made it following Kubrick’s death in 1999. While not entirely seamless, the result is a fascinating and often brilliant amalgamation of two distinct sensibilities. Set in the late 22nd century, with coastal cities submerged on account of global warming and rising sea levels, the story, which echoes Pinocchio, concerns David (Haley Joel Osment), a mechanical boy programmed to feel love. Abandoned by his adoptive human family, and spurned by society, David, accompanied by his faithful mecha teddy bear, and sex worker robot Gigolo Joe (Jude Law), yearns to somehow become a real boy. 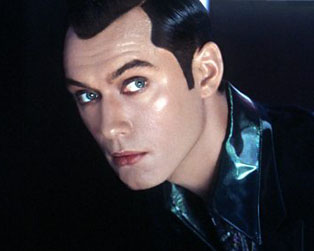