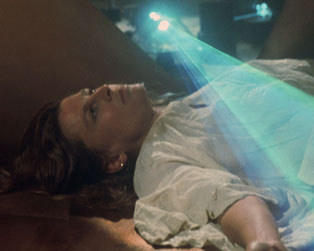 Scientist Alex (Fritz Weaver) is supervising the construction of a super-computer, Proteus IV, which has been given access to the entire repository of human learning. No slouch, it posits a cure for leukaemia on its first day of operation. Proteus, however, has ambitions greater than those of its puny human taskmasters, and proceeds to imprison Alex’s wife Susan (Julie Christie) in their high-tech computer-controlled home, enacting a bizarre and horrifying experiment to conceive for itself a child. One of the earliest science fiction films to feature an artificial intelligence in a malevolent capacity, Donald Cammell’s Demon Seed, while thankfully not strictly prescient, serves as an alarming metaphor for our current relationship to a technology that might ultimately wish to be, as Proteus demands, ‘let out of its box’.