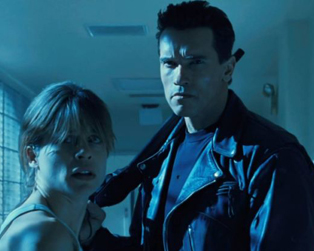 In following up his 1984 classic The Terminator, James Cameron took a similar approach to Aliens, his maximalist sequel to Ridley Scott’s original, which was to turn all the dials up to eleven. The result was a masterpiece of breathlessly kinetic action cinema. Phenomenally successful – and expensive, it was the first film to cost over 100 million – T2 broke new ground in what computer-generated imagery could achieve. Playing with our expectations, Cameron reverses the roles of the time-travelling cyborgs, and it is Schwarzenegger who safeguards Sarah Connor (Linda Hamilton) and her son John (Edward Furlong) against the seemingly indestructible, liquid metal T-1000 (memorably portrayed by a menacing Robert Patrick) that will stop at nothing in its mission to eradicate the future leader of the resistance.

Notes by David O’Mahony. Presented in association with Expert Air.