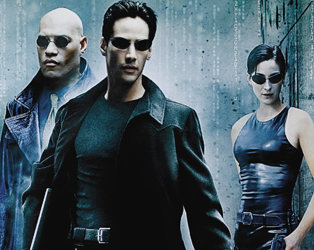 This screening was introduced by Dr. Harvey O’Brien, UCD School of English, Drama, and Film.

Computer programmer Thomas Anderson (Keanu Reeves), aka Neo, senses something is wrong with the nature of reality, and is consumed with learning ‘What is the Matrix?’ Going further down the rabbit hole, Neo uncovers the terrifying truth that the world as we perceive it is a simulation created by machines to keep us docile as they harvest our bodies for energy. Liberated from this prison, Neo joins a band of freedom fighters, led by the mystical Morpheus (Laurence Fishburne), and begins to realise the unique role he must play in the coming revolution against the machines. An extraordinary blend of dynamically choreographed action set-pieces, cutting-edge special effects and surprisingly effective philosophical ruminations, The Matrix set an impressively high standard for future sci-fi action cinema and is presented here in a 4K restoration.

Notes by David O’Mahony. Presented in association with Dublin 2019: An Irish WorldCon.

Presented in association with Dublin 2019 – An Irish Worldcon.