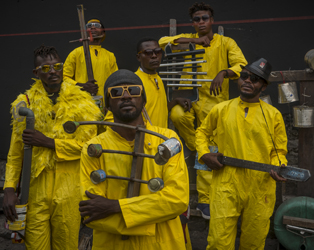 August 9th 2019: The Irish Film Institute (IFI) is proud to announce the programme for the 17th IFI Documentary Festival. With fifteen features and its perennially popular shorts programme, the festival will once again showcase the very best of Irish and international documentary filmmaking. The festival runs from Wednesday, September 25th to Sunday, September 29th and will open with the Irish premiere of Benjamin Berman’s The Amazing Johnathan Documentary.

This year’s line-up will also include the world premiere of Peter Kelly’s Journey to the Edge, Paul Duane’s Best Before Death featuring a live performance from Bill Drummond and Tam Dean Burn, plus a whole host of invited guests and panellists.

Opening film The Amazing Johnathan Documentary sees the lines between illusion and reality become blurred for director Benjamin Berman when he films the comeback tour of magician-comedian The Amazing Johnathan who, given a year to live in 2014, retired from public life, only to find himself still alive three years later. With filming underway, Johnathan drops a bombshell which forces Berman to choose between giving up on the project, or embracing the unconventional possibilities it affords.

Peter Kelly’s Journey to the Edge follows the epic voyage of Galway businessman Enda O’Coineen, the first Irishman among an elite group of sailors aiming to single-handedly circumnavigate the globe as part of the arduous Vendée Globe Race. As O’Coineen sets out on the 50,000km, two-month-long race, his physical and psychological stamina is tested as he battles storms, failing equipment and himself. This world premiere screening will be followed by a Q&A with O’Coineen and Peter Kelly.

The IFI is delighted to welcome renowned musician and artist Bill Drummond to the IFI for a screening of his second collaboration with director Paul Duane, Best Before Death. The film focuses on Drummond’s visits to Kolkata and North Carolina to build beds, bake cakes, make soup and shine shoes. The screening will be bookended by a short play in two parts, White Saviour Complex, written by Drummond and performed by him and actor Tam Dean Burn.

Other guests scheduled to appear during the festival include director Alan Leonard and producer Níall Carver of Heyday, a portrait of late musician Mic Christopher featuring contributions from Sharon Horgan, Josh Ritter, Lisa Hannigan and Glen Hansard; director Ziad Kalthoum will take part in a Q&A following the screening of Taste of Cement, a look at the lives of Syrian labourers working on skyscrapers in the searing heat of Beirut; and Renaud Barret, director of the festival’s closing film, Système K, which examines the emerging art scene in Kinshasa amid social and political unrest.

As always, the IFI Documentary Festival will present films that engage with today’s burning issues: Push, directed by Fredrik Gertten, examines the global commodification of housing through the eyes of Leilani Farha, the UN Special Rapporteur on Adequate Housing; Gods of Molenbeek looks at the lives of two six-year-olds who live in the Brusselian district that has become synonymous with terrorist cells and social unrest; while Rachel Leah Jones and Philippe Bellaiche’s Advocate follows Lea Tsemel, an Israeli lawyer who has defended the human rights of Palestinian prisoners for five decades.

Award-winning photographer Seamus Murphy chronicles the creative process of award-winning musician PJ Harvey in the breathtaking A Dog Called Money. Travelling together on some of his worldwide reporting trips to Afghanistan, Kosovo, and Washington DC, Murphy collects images of vast and varied landscapes while Harvey collects words which will form the basis of her album, The Hope Six Demolition Project. The screening will be followed by a Q&A with director Seamus Murphy.

Elsewhere in the programme, five students travel throughout Europe as they embark on the Erasmus programme in the Irish premiere of Angeliki Aristomenopoulu and Andreas Apostolides’s Citizen Europe; a group of retired Sudanese filmmakers try valiantly to bring the movies back to the people of their homeland in Suhaib Gasmelbari’s award-winning Talking About Trees; a pair of stray dogs rule a Chilean playground in Iván Osnovikoff and Bettina Perut’s beguiling Los Reyes; director Mads Brügger examines the mysterious circumstances behind the death of the former Secretary-General of the UN in Sundance hit Cold Case Hammarskjöld; and an idyllic public pool, and a way of life for its regulars, comes under threat in Hristiana Raykova’s The Pit.

Tickets are available online from www.ifi.ie/docfest, the IFI Box office at 6 Eustace Street, Dublin 2, and over the phone at 01 679 3477.

Individual screening tickets are €11.50. Tickets for the opening night film, The Amazing Johnathan Documentary, which includes a post-show reception, cost €15. Tickets for Best Before Death, including Bill Drummond and Tam Dean Burn performing White Saviour Complex, cost €18. A special multi-film pass is available in person only from the IFI Box Office: 5 films for €50.

For more information on interview availability and high-res images, please contact Aisling O’Halloran at the IFI Press Office (01 679 5744) or aohalloran@irishfilm.ie.

The IFI acknowledges the financial support of the Arts Council. The IFI Documentary Festival is supported by Dublin Port Company, Screenscene and RTÉ Supporting the Arts.