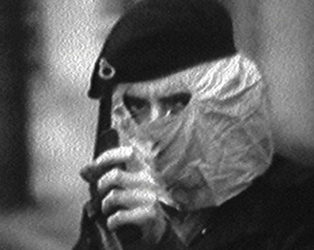 NORTHERN IRELAND – OUR BATTLE OF IMAGES THIS APRIL AT THE IFI

March 21st 2019: This April, the Irish Film Institute, in conjunction with filmmaker Dónal Foreman, is proud to present Northern Ireland – Our Battle of Images, a season of rarely-seen alternative perspectives on the Troubles. Featuring films from France, the United States, England, and Switzerland, the films provide a fascinating alternative look at how the conflict was viewed beyond this island. Many of the films have not screened in Ireland since their initial circulation, and all will be presented collectively here for the first time.

The images that have come to define the Northern Ireland conflict have been primarily those of television and fiction: news reports, talking-head documentaries, gritty crime movies and human interest dramas. However, there is another visual history of the conflict preserved in the lesser-known work of a diverse group of international, politically militant and formally experimental films of the 1970s and 1980s. The films in this season highlight how the now-familiar images of Northern Ireland during that time were manipulated and weaponised by the state and the media.

The season will open on Saturday 6th with Armand Gatti’s The Writing on the Wall (Nous étions tous des noms d’arbres). Filmed during the 1981 hunger strikes by the French avant-garde theatre pioneer, this docudrama was produced with a cross-community workshop from Derry, and mixes folk wisdom with philosophical reflections on the intersections of images and power. The film will screen with Fergus Daly’s documentary, Welcome to Our Battle of Images, in which he interviews Gatti about his time in Derry, and will be introduced by Joseph Long, who worked alongside Gatti in 1981.

On Monday 15th, the late Arthur MacCaig’s Irish Ways screens alongside The Image You Missed, directed by his son Dónal Foreman. Produced for French TV, Irish Ways is a visually lyrical, character-centred film, which allows the political situation reveal itself gradually through a series of individual portraits from all sides. Created after MacCaig’s death, The Image You Missed draws on the entirety of MacCaig’s archive of Northern Ireland intercutting it with Foreman’s own images to explore the two filmmakers’ contrasting experiences of Irish nationalism. This screening will be introduced by Dónal Foreman.

Also screening as part of the season will be Pat Murphy’s loosely autobiographical drama Maeve, about a young woman returning to Belfast after studying art in London; St. Clair Bourne’s The Black and the Green, a unique chronicle of a fact-finding trip to Belfast made by five black civil rights activists in 1982;  John Reilly and Stefan Moore’s The Irish Tapes, a documentary filmed in Belfast over a three-year period in the early 1970s, supported by a US group associated with the Official IRA; and Ireland – Behind The Wire, a first-hand documentary made by a British filmmaking collective exploring the early years of the Troubles, from Bloody Sunday to the burning of Dublin’s British embassy in 1972.

The season will close on Tuesday 30th with Marcel Ophuls’s A Sense of Loss, a remarkable investigative work in which the internationally renowned director identifies a number of incidents, and then gathers conflicting views of those events from a range of interviewees, from the victims’ families, to Bernadette Devlin and the British Home Secretary.

Tickets for Northern Ireland – Our Battle of Images are now available here, or from the IFI Box Office on 01-6793477. For more information, images or interview availability, please contact Aisling O’Halloran at the IFI Press Office on 01-6795744.