OUR BATTLE OF IMAGES: IRELAND – BEHIND THE WIRE

This film screened on Thursday 25thApril 2019.

This screening was introduced by Dr Maeve Connolly of IADT.

Produced by the London-based Berwick Street Film Collective, Behind The Wire features some of the most remarkable first-hand documentation of the early years of the Troubles. Some of its most searing images would be re-used in many other films including The Patriot Game, and it shares with MacCaig’s film an urgent sense of solidarity with Republican communities. Its allegiances are also
subtly distinct: Behind the Wire was distributed in Ireland by the Official IRA, while The Patriot Game was supported by their rivals, the Provisionals. The Berwick Street filmmakers are also distinguished by the visually rich and attentive care with which they document the daily practices of defence and survival carried out by Republican communities. 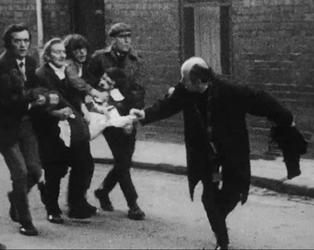