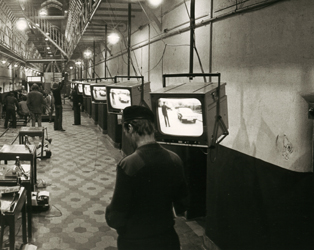 NORTHERN IRELAND – OUR BATTLE OF IMAGES

The images that have come to define the conflict have been primarily those of television and fiction: news reports, talking head documentaries, gritty crime movies and human-interest dramas. However, there is another visual history of the conflict  preserved in the lesser-known work of a diverse group of international, politically militant and formally experimental films of the 1970s and 1980s.

While most could be classed as documentarians, their innovative formal approaches discourage  any complacent acceptance of the ‘real’, and often highlight how images of Northern Ireland have been manipulated and weaponised by the state and the media. Coming from various radical and artistic milieus in New York, London and Paris, the filmmakers collaborated with locals eager for representation outside the narrow frames of Irish and British media, and films such as The Patriot Game and Behind the Wire would even become organising and fundraising tools for Republicans and their international supporters.

Many of these films haven’t screened in Ireland since their initial circulation, if at all, and they are presented here collectively for the first time. This programme evolved in tandem with Donal Foreman’s documentary about his father Arthur McCaig, The Image You Missed, a frequent documentarian of the Troubles. This season has been curated in consultation with Sunniva O’Flynn, IFI Head of Irish Film Programming.