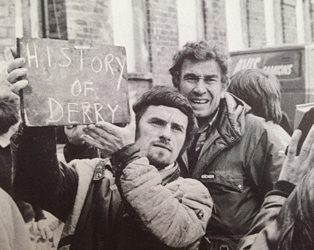 This screening was introduced by Joseph Long.

“Welcome to our battle of images! An Irishman never speaks to the person in front of him, but to an image!” The multiple meanings of this slogan spoken by Free Derry activist Paddy “Bogside” Doherty evoke some of the complexity of this docudrama produced with a cross-community workshop which Doherty ran in Derry. Filmed during the 1981 hunger strikes by French avant-garde theatre pioneer Armand Gatti, the film mixes folk wisdom with reflections on the intersections of images and power. Local teens play versions of themselves attempting to put on a play about a dead British soldier, and, as the “battle of images” implies, much is at stake in these questionsof representation in Northern Ireland’s burgeoning surveillance state.

ALSO SCREENING: WELCOME TO OUR BATTLE OF IMAGES
In this short documentary, Fergus Daly interviews Gatti shortly before his death about his time in Derry.
FILM INFO: Fergus Daly, 30 mins, Ireland, 2009, Digital