OUR BATTLE OF IMAGES: IRISH WAYS / THE IMAGE YOU MISSED

This screening will be introduced by Dónal Foreman.

IRISH WAYS
Returning to Belfast ten years after his debut success The Patriot Game, Paris-based Irish-American Arthur MacCaig counters the previous film’s rough-hewn didacticism with a much more visually lyrical, character-centred approach, letting the political situation reveal itself gradually through a series of individual portraits on all sides, from both Republican and Loyalist paramilitaries to RUC officers and
victims of violence. Produced for French TV, the film’s vibrant 16mm colour imagery nonetheless makes it a must-see on the big screen.
FILM INFO: Arthur MacCaig, 55 mins, France, 1988, 16mm

THE IMAGE YOU MISSED
Created after MacCaig’s death by his son, Donal Foreman, The Image You Missed draws on the entirety of MacCaig’s archive of Northern Ireland (including some extraordinary outtakes from Irish Ways), intercutting it with his own images to explore the two filmmakers’ contrasting experiences of Irish nationalism, the role of images in social struggle, and the competing claims of personal and
political responsibility.
FILM INFO: Donal Foreman, 74 mins, Ireland-USA-France-UK, 2018, Digital 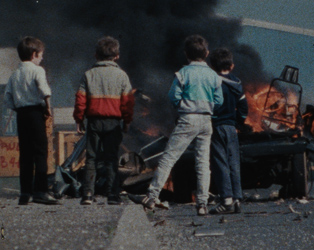