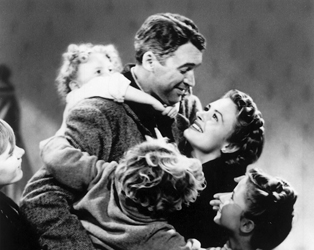 As the festive season draws near, we’re looking forward to a host of special seasonal treats at the Irish Film Institute for Christmas 2019!

CHRISTMAS MENU AT THE CAFÉ BAR
Our delicious Christmas menu is available every day in December at the IFI Café Bar, with two courses for €19 and three courses for €25. You can choose from mains including a roulade of roast turkey and pain fried salmon and desserts like Christmas pudding and Mulled Winter Fruits with Cinnamon Cream!

GIFTS AT THE IFI SHOP
The IFI Shop is a treasure trove in the heart of Temple Bar, with a huge selection of DVDs, blu-rays and books including rare and hard to find titles. And if we don’t have what you’re looking for in stock, we can almost certainly order it in! Call 016795727 for enquiries, we can post things out to you too!

IT’S A WONDERFUL LIFE – from Dec 13th
The ultimate Christmas movie makes a return in a dazzling new restoration. Frank Capra’s 1946 classic stars James Stewart as George Bailey, who convinces an angel named Clarence that it would have been better if he was never born at all…

BAIT – from Dec 20th
Back after sold out shows in October, Mark Jenkin’s utterly unique film captures the story of a fisherman struggling to make a living as tourists take over the town, shot on a vintage 16mm camera using monochrome Kodak stock, hand processed by the director. Limited run.

MILES DAVIS: BIRTH OF THE COOL – from Dec 20th
Featuring never-before-seen archival footage, studio outtakes, and rare photos, Miles Davis: Birth of the Cool returns after two sold out screenings in October, telling the story of a truly singular talent and unpacking the man behind the horn.

THE UMBRELLAS OF CHERBOURG – from Dec 20th
Told in a riot of rich, beautiful pastels (here in a new restoration), and set to Michel Legrand’s magnificently memorable score, the film is a rare treat, from what critic Geoff Andrew calls its ‘bauble-bright start to bittersweet end’. Starring Catherine Deneuve and Nino Castelnuovo.

THE MAN WHO INVENTED CHRISTMAS – Dec 22nd
For this unusual adaptation of A Christmas Carol (partly shot in Ireland), we go behind the scenes of Charles Dickens’s imagination, to see how he might have come up with the characters of his much-loved tale. Starring Dan Stevens and the terrific Christopher Plummer.

DARBY O’GILL AND THE LITTLE PEOPLE – DEC 29th
When Darby O’Gill (Albert Sharpe), a wily caretaker falls down a well, he is held captive by Brian, King of the  Leprechauns (Jimmy O’Dea) who grants him three wishes. This 60th anniversary screening will be introduced by Conor Doyle, godson of Jimmy O’Dea.