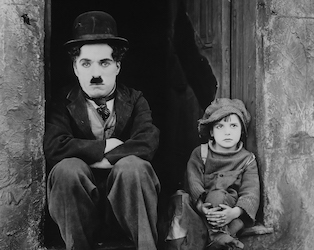 CHARLIE CHAPLIN: A SMILE AND A TEAR

The place of Charlie Chaplin’s films in the canon is assured. Over a century after his first appearance, the Tramp persona remains instantly recognisable and beloved the world over. Chaplin began performing as a child, honing his skills in vaudeville. He moved to film in 1914, making shorts for Mack Sennett at Keystone Studios for $150 a week; within two years, at just 26 years of age, he was earning the staggering salary of $670,000. His popularity gave him the freedom to assert himself as a filmmaker, revealing Chaplin to be a pioneer whose technical innovations and deft mixture of comedy and pathos have proven incalculably influential. While he has been cited by subsequent giants of comedy such as Jacques Tati and Billy Wilder, it is perhaps more indicative of the quality and longevity of his work that it has been openly admired by international directors such as Satyajit Ray, Tarkovsky, Fellini, Kieślowski, Bresson, and Haneke.