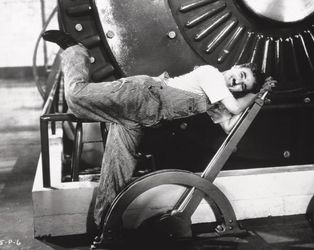 Five years would pass after City Lights before Chaplin would return to the screen with the film that would see him bid farewell to silent cinema and to the persona of the Tramp. Throughout his career, Chaplin was unafraid to tackle social and political issues, but these had not previously been as to the fore as in Modern Times, a film he claimed was inspired by conditions during the Great Depression, and a conversation with Gandhi. After suffering a breakdown while working on an industrial assembly line, the Tramp ends up in prison. He is released after accidentally foiling an escape, but is determined to return, in the process meeting Ellen (Paulette Goddard). Although dealing with more substantial themes, the film also contains some of Chaplin’s funniest and most imitated sequences.