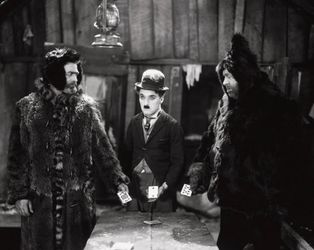 In 1923, Chaplin turned his directorial hand to drama with A Woman Of Paris, in which his only appearance was in a brief, uncredited cameo. Wounded by the film’s commercial failure, he returned to comedy and created one of his most enduring films, the one for which he frequently claimed he wished to be remembered. When circumstances lead a successful gold prospector to forget the location of his huge find, he is forced to search for the Tramp to help him. Meanwhile, the Tramp is in a neighbouring town, attempting to court a beautiful dance hall girl. The film contains some of Chaplin’s most iconic sequences, such as the eating of a boot and the dance of the bread rolls.