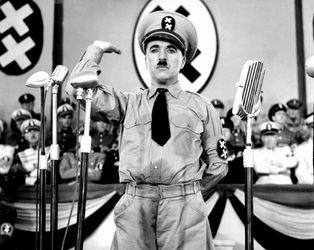 Chaplin’s first true sound film was both scathing satire of and prescient call to arms against the forces of fascism that were sweeping Europe at the time. Chaplin takes on the role of dictator Adenoid Hynkel, in which he makes absolutely no effort to mask the parody of Hitler, whose mannerisms he studied in Leni Riefenstahl’s Triumph Of The Will (1935). In addition, he portrays a timid Jewish barber who is caught up in Hynkel’s pogrom (arguably, Chaplin also his unadorned self in the film’s final speech). As with all of his films, The Great Dictator is very funny, and contains some astonishing set pieces, such as Hynkel’s dance with the globe balloon, but it is the undercurrent of anger suffusing the film that renders it breathtaking, particularly given the lack of knowledge at the time of the full extent of the horrors being perpetrated by the Nazis.