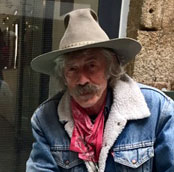 February 27th  2017: IFI will present a selected programme of films directed by John T. Davis (Mar 8th to 22nd), including an in-depth career-spanning interview hosted by writer and broadcaster Vincent Woods. The interview event will also include a screening of his new work-in-progress mshiikenhmnising.

John T. Davis is internationally recognized as Northern Ireland’s most distinctive documentary filmmaker and cinematographer. To mark his 70th birthday on March 7th 2017, and in celebration of an oeuvre spanning more than 40 years, we present this selected retrospective of his work.

Commenting on the launch of the season, Head of Irish Film Programming Sunniva O’Flynn commented, “There’s no better way to encounter the work of John T. Davis than in this vivid series of portraits of people and place captured through in his singular vision.”

Davis’s decidedly creative documentaries cover many subjects, but are drawn together by common threads: autobiography and self-portraiture through the lives of others, journeying and the quest for spiritual meaning, marginal places and outsiders, and music ranging from punk rock to gospel, western swing to dance hall reggae.

Born in Holywood, Co. Down in 1947, John showed an early talent for technical design but went on to study painting at Belfast College of Art. The inheritance in 1974 of an 8mm camera from his uncle John McBride Neill enabled John to make his first film, the experimental Warhol/Reid-inflected Transfer (1975). He began his professional filmmaking career in 1977, and rapidly developed a personal vision and poetic style that was to characterize the work throughout his career.

The retrospective opens on Wednesday, March 8th at 18.30 with a 35mm screening of The Uncle Jack, a semi-autobiographical portrait of Davis’s maternal uncle and Ulster cinema architect, John McBride Neill. Through a montage of dramatic reconstructions, abstract sequences, contemporary narrative and diverse archival sources, Davis’s moving tribute to Jack is bound up with a deeply personal statement about the power of obsession and the drive towards creativity.

On Saturday, March 11th at 13.30, we will present a double bill of Shellshock Rock which captures the bristling energy of the Northern Irish punk scene in the late 1970s, and Self-Conscious Over You, a film of the Outcasts gig at the Ulster Hall in April 1980 which inspired the climactic sequence in Lisa Barros D’Sa and Glenn Leyburn’s feature Good Vibrations (2012).

Screening later the same day at 15.30, Davis’s epic road film Route 66 chronicles the history and subsequent 1981 closure of the iconic highway that spanned 2500 miles from Chicago to Los Angeles, traversing eight states and cutting through the heart of Middle America.

There will be a second double bill on Sunday March 12th at 13.30 with screenings of Power in The Blood which follows gospel singer and preacher Vernon Oxford as he journeys from his home in Franklin, Tennessee to Belfast on a mission to bring the healing power of Jesus back to Northern Ireland.  This film will then be followed by Dust on the Bible, a lyrical 50-minute visual poem focussing on Belfast’s charismatic street preachers and features an impassioned sermon from Pastor James McConnell.

The final film in the retrospective is Hobo on Tuesday, March 14th at 18.30. Intensely personal, the film is a portrait of Beargrease, a man gripped with chronic wanderlust. A fiercely independent individual, he embodies the traits of the classic American railroad vagabond. This daring, visually exquisite film examines the limits of human endurance, questions the price of freedom and responsibility and lays bare the thin thread by which our own reality hangs.

The retrospective will close on March 22nd with a public interview conducted by broadcaster Vincent Woods, showcasing footage from Davis’s current work-in-progress mshiikenhmnising.

Tickets for these screenings and John T. Davis in conversation on March 22nd are available now from the IFI Box Office on 01 679 3477 or online here.

MAR 22nd (18.30):  INTERVIEW BY WRITER AND BROADCASTER VINCENT WOODS. THE EVENT WILL INCLUDE A SCREENING OF HIS NEW WORK-IN-PROGRESS MSHIIKENHMNISING.