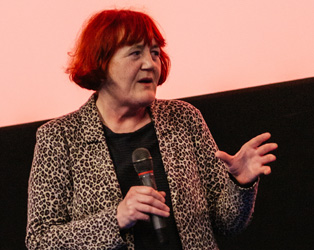 Since production of her early shorts in the 1980s, Trish McAdam has created a vibrant and varied body of work, embracing a range of forms and subjects and retaining a distinct, independent voice.

McAdam became interested in filmmaking after working in New York with photographer Nan Goldin and Super 8 filmmaker Vivienne Dick. A co-founder of the Ha’penny Film Club, her early 16mm shorts Berlin and The Big Time were formally experimental and influenced by fine art practices. Snakes and Ladders (1997), her debut feature, was one of the first Irish films directed by a woman about contemporary women’s lives, and she continued to position women squarely on screen with her ground-breaking documentary series Hoodwinked: Irish Women Since the 1920s.

McAdam has noted that her inspiration is as much from art, literature and music as it is from film. This is in evidence in her documentary investigations of artists Leo O’Kelly and Donal O’Kelly, and in a series of short films about Chinese political poet and human rights activist Liu Xiaobo. Her most recent works Strangers to Kindness, Whistleblower and Confinement, are further testament to an endlessly curious, ongoing search for new and engaging modes of story-telling.