Performers Jean (Pom Boyd) and Kate (Gina Moxley) act out outlandish routines on the streets of Dublin. Jean is impatient with her overbearing mother (Rosaleen Linehan) and ambivalent about her musician boyfriend (Seán Hughes). When Jean impulsively accepts a marriage proposal from Martin, she sets in motion a chaotic series of events which affect all the characters’ lives.

Boyd and Moxley’s naturalistic performances capture the intense love-hate dynamic that close friends often share. Capturing a potent sense of 1990s Dublin with its vibrant music scene (note the rousing score by Pierce Turner) and sweaty clubs and pubs, the film, which McAdam has aptly described as “a funny drama and a serious comedy”, certainly stands the test of time. 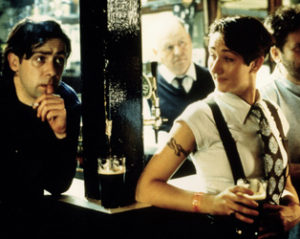