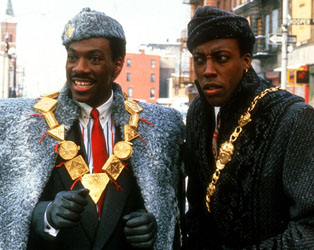 Starting on Tuesday, October 10th and running on consecutive Tuesdays until November 14th, the course looks at six very different comedies. Presenters, including comedian Alison Spittle and author Gerard Stembridge, will explore the selection that covers mainstream, silent, rom-com, Irish comedy, satire and the absurd. Comedy has evolved from its earliest days with little “mischief joke” movies such as the Lumière Brothers’ L’arroseur arrosé (1895) to become an integral element of cinema, crossing film genres and acting as a vehicle for social and cultural commentary.

Comedian Alison Spittle will kick off the course with a screening of Coming to America, in which Eddie Murphy plays pampered African Prince Akeem whose parents want him to marry, but agree to give him forty days of unspoiled freedom in the US. Pronouncing it ‘one of Eddie Murphy’s last good films’, Spittle will talk about the film and its use of gags, slapstick, and great visual effects.

Frank Capra’s Oscar-winning It Happened One Night will screen on the course’s second week. The film concerns the road trip of heiress Ellie (Claudette Colbert) and wisecracking reporter Peter (Clark Gable) who offers to help her reunite with her aviator husband; what begins as a mock courtship slowly turns into a real one. Among the romantic comedy conventions that originate in the film is the figure of the ‘runaway bride’ which will be the subject of Professor Diane Negra’s talk.

Week three will look at a silent film, the 1920s, and Clara Bow as an icon of the Jazz Age. Dr. Gwenda Young will discuss Clarence Badger’s It. While many silent comedies relied heavily on slapstick and sight gags, Clara Bow offered comic performances that were sexy and lovable. In It, perhaps her best film, she is plucky shopgirl Betty, who falls in love with the shop owner’s son, only to have him reject her.

Week four will look at absurdist comedy, with a screening of Roy Andersson’s Songs from the Second Floor. Taking a look at corporate life, the former commercials director uses a static camera to record seemingly disconnected events – a man losing his job, another burning down his shop, and a magician sawing a volunteer in half. Justin MacGregor, the John Sherlock Assistant Professor of Screenwriting at Trinity College Dublin, will talk about the Scandinavian comic film and the keen edge it negotiates with tragedy.

Week five will feature the hit Irish comedy The Young Offenders. Irish comedy has, possibly more than most, undergone many transformations. The early gombeen made way for jovial gangsters, raw addicts or the occasional buddy movie. This recent hit touches on all of these but also derives much of its humour from its regional locations traversed by two pals on stolen bikes in search of a bale of cocaine. Dr Anthony McIntyre will consider the film’s particular take on masculinity through its tender depictions of the hapless thieves.

Rounding off in week six will be a look at satire with Alexander Payne’s Election. Writer, director and author Gerard Stembridge aimed his merciless pen at public figures with the famed 1980s show Scrap Saturday, with co-creator Dermot Morgan. Here we will celebrate one of his favourite films: Payne’s scathing satire on the US election system manifested in a high school election being commandeered by scheming teen Tracy Flick, brilliantly played by Reese Witherspoon.

The IFI Evening Course is open to all to attend and no previous study is required. Click here to read about the full lineup.

COURSE SCHEDULE:
Please note: The course will run on consecutive Tuesdays, starting at 18.30 unless otherwise stated. The order may vary.